EXHM, the artist’s abbreviation for exhumation, emphasizes the feeling one gets from his burned ceramics, bleached black denim canvas and melting urethane sculptures, an expurgation of all his feelings about society.

Sterling Ruby came into the world of art through the punk movement, a movement of transgression. His persona comes out through his works in an anarchic, spilled-guts style, to create a deterioration kind of beauty. All arranged in a very punk way.

The cardboard pieces that he used to protect the studio floor turns into compositions with urethane marks that look like blood from his sculptures, footsteps and objects he found laying around and glued to it, like a cough medicine box, beer cartons and album covers of bands that he listened to or liked, or that maybe were passed on to him by a manipulative music industry.

Being Mike Kelley’s assistant for two years helped Ruby develop this anarchic side and explore the power mechanisms used by society. That’s where his vampire Mouth sculptures come from. Made in soft cushioned fabric, in red, white and blue, representing the American culture devouring people’s minds. There is also a big teddy bear-like cushioned piece in American flag print. Maybe you want to hug it?

The American cultural industry is all over his art. Even through the freedom of materials he uses. You can feel California’s free spirit in the tie-die bleach stains and at the same time see the deterioration aspect of it. The duality between repulsion and attraction gives his work force.

His monolith stalagmites in urethane, like CDDR, also bears the red, white and blue colours, but in a melting form. The textures Ruby uses tells a lot about him, or at least about his studio. It must be huge to be able to paint stains like these in canvas so big and he must have a big oven to cook his ceramics too.

Ruby’s works function in the interstice of both personal and social levels. His pieces are emotionally charged. The pair of jeans he added to the BC series collages is a perfect example. They must have been very special for him to want to eternalize it.

Between the aesthetically engaging, attractive colours, and the gruesome, degrading look of his pieces is hard to decide if they are appealing or appalling. You can make your own interpretation. But it definitely has an emotional approach. It’s an expurgation of the artist’s feelings after all.

Sterling Ruby’s EXHM is in London’s Hauser & Wirth at Savile Row until May 4th. 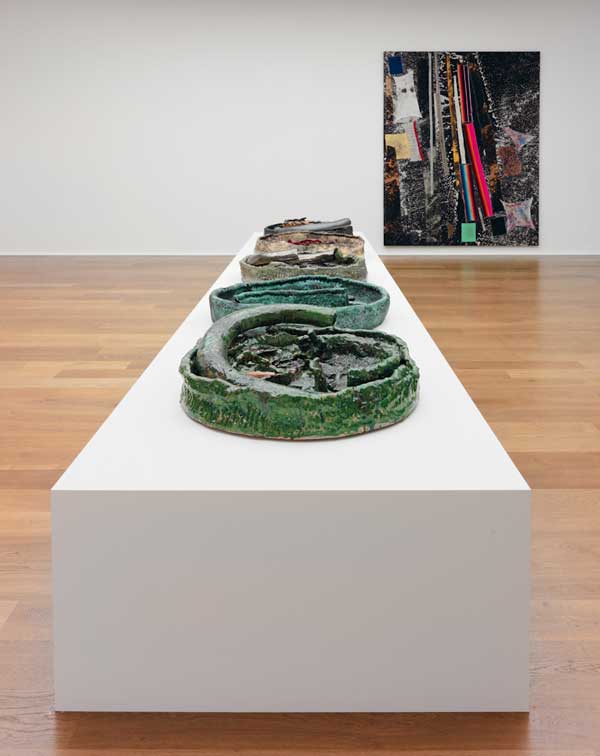