Art can happen anywhere, anytime. Like cave paintings that emerged on a specific time and place, without any practical explanation other than the need to understand the world and our own self and communicate it symbolically. In this sense, art is the rock in the path. It can be provoked by anything, a chance encounter that asks you who you are and brings out feelings that can only be expressed metaphorically.

This epiphany happened while speaking to Thiago Rocha Pitta, a Brazilian artist that inspires phenomenological and literary feelings in me. I can’t help relating him to his origins. He was born in Tiradentes, Minas Gerais, a place I have visited many times as a child. Minas is a region that has a rich history of art that goes from the Baroque colonized era until today with the amazing contemporary art centre Inhotim.

Thiago has worked along with Tunga for many years and also with Lygia Pape. Primarily influenced by his artist father, his media goes from video to installation, always relating to nature in a poetic way. He creates pieces that bring out the innermost deep feelings that are hard to put in words. Like with “L’Eremita”, and his latest “L’Eremo” (“The Hermit”). Unfortunately translation does not allow to faithfully tackle the name the artist chose for his creation.

Both are tent-like pieces, the cloth bathed in a cement soup that petrifies it, firmly nailed to the ground. The former was built in the mountains in Engadin, St. Moritz, in 2012, and the latter inside the gallery and presented in a residency program at Gluck50, Milan, in early 2013. There he carved a deep hole on the gallery floor and placed the cement soaked tent above.

They offer a sense of protection, even though it appears a rather rough shelter. Only those who go inside can know what will happen to them. People had strange reactions in there, some even fear, he told me. Like the cave men that placed their paintings inside a cave to protect them from the outside, in this piece art happens to those who enter the tent.

“L’Eremo” offers a chance to experience art protected, isolated from the urban world outside. Inside only silence, you, the tent, and the world outside. In this case, silence is a sort of speech, like the rock in the middle of the path in Drummond’s poem, a silence that says everything.

His works evokes forces of nature to poetically express feelings that are hidden inside all of us, waiting for a chance encounter to bring them out. We feel like the boat in “Herança” (“Inheritance”), floating in the middle of the huge sea, waiting for something to occur. Evoking and being chance itself.

Now Thiago wants to leave the institutional realm and loose himself on the desert. I am eager to see what will he encounter and transmit through art. He is the proper hermit, oozing fluidly, flowing through life. He does not believe he belongs to Brazilian art because art can happen anywhere, he says. In the desert wants to make a video and dreams of showing his next piece there. It would surely be a sublime happening. 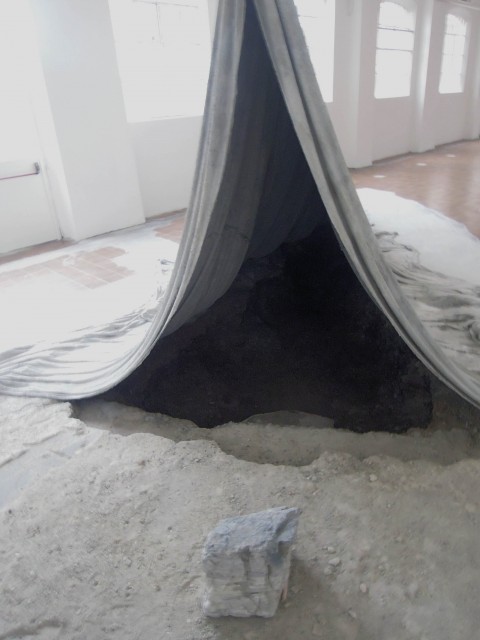