“Today We Reboot the Planet”, on until November 10, shows us a glimpse of a lost world, fruit of an imaginative narrative told through a distinct voice to make us contemplate on what would become of our culture in a post-apocalyptic scenery.

Like in a Hollywood movie, you encounter the most random objects, like iPods, fossilised fruits and utensils diligently set along glass racks. The way the “found” objects were exhibited made me envision a greenhouse/lab where potatoes grew from stone fishes, where clay objects and plants were put together by an alien who tried to figure out, experimenting, what our lost civilisation was like. Fungus and other microorganisms growing on otherwise dead pieces. Just one layer of the multiple paradoxical dimensions present in his works.

Villar Rojas is influenced by pop culture, ranging from cartoons, sci-fi, to quantum physics. The parallel reality presented by him makes you ponder on the world we live today, reflected and clashed in this simulacrum where recognisable figures of today are featured alongside canonical pieces like the legs of Michelangelo’s David, there only serving as a plinth for an other banal sculpture. An enactment of what an extraterrestrial might do if he encountered all these objects scattered around, after the end of the world as we know it, and organised them according to his own choice. Art then would have lost its meaning, only to be reconstructed by an alien mind that would use our culture as a readymade to create an other symbolical piece that makes sense to him. 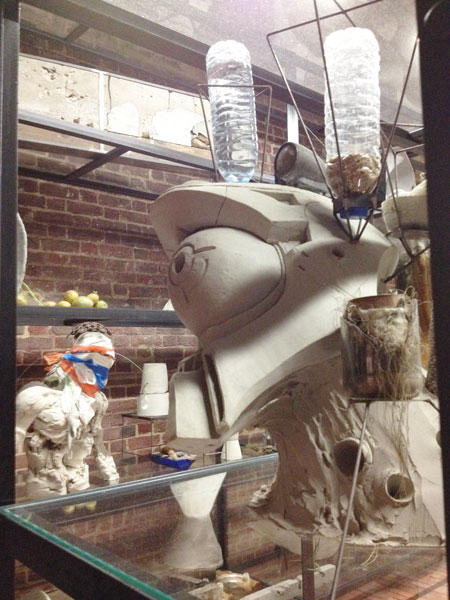 His participation on the “End of the World Biennial” in Patagonia in 2009 was crucial to manifest his apocalyptic narrative on to the world. After that he presented a collapsed obelisk in the Tuileries gardens in Paris to confront the public with a scene of a disappeared, destroyed civilisation. His individual language comes from bringing to Contemporary Art – and therefore closer to reality – what you might see in movies, following the tendency of end of the world, zombies, etc. that aroused close to the turn of the millennium.

The now 33 years old represented his country, Argentina, at the 54 Venice Biennale (2011) and at Documenta (13) in Kassel. For his first exhibition in the UK he brought his team of eight assistants to create on site the gigantic sculpture of an elephant pushing and supporting the weight of a whole wall structure also made of a non-baked clay that falls apart, adding to the paradoxes between construction/destruction, life/death, strength/fragility, ancient/contemporary, value/non-value. After the exhibition closes all the pieces will be destroyed.

His otherworldliness, even in his own persona – he looks like an elf to me – brings even more mythological power to his work. It is definitely a breath of fresh air coming from Argentina, opening the Serpentine Gallery’s new exhibition space. Adrián transformed the inside of the former 1805 munitions storage laying loose bricks all through the gallery floor that sings as you walk, cling, cling, cling. This and the cracked walls are a beautiful reminder of the fragility of the materials we build upon. 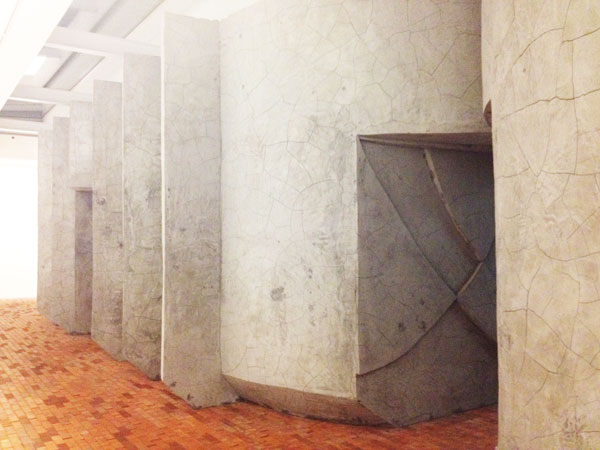