What is light for you? This seems like an easy question at first, but it is a difficult one at second thought. The kids said they knew what it was but it was hard to explain. With a little time some answers started to come up: it illuminates things, it is clarity. Then we ask, and what happens if there’s no light? Darkness, we can’t see. And what do you do then? We use a candle or a flashlight to see. That is exactly what we wanted to show, that without light our eyes won’t work. 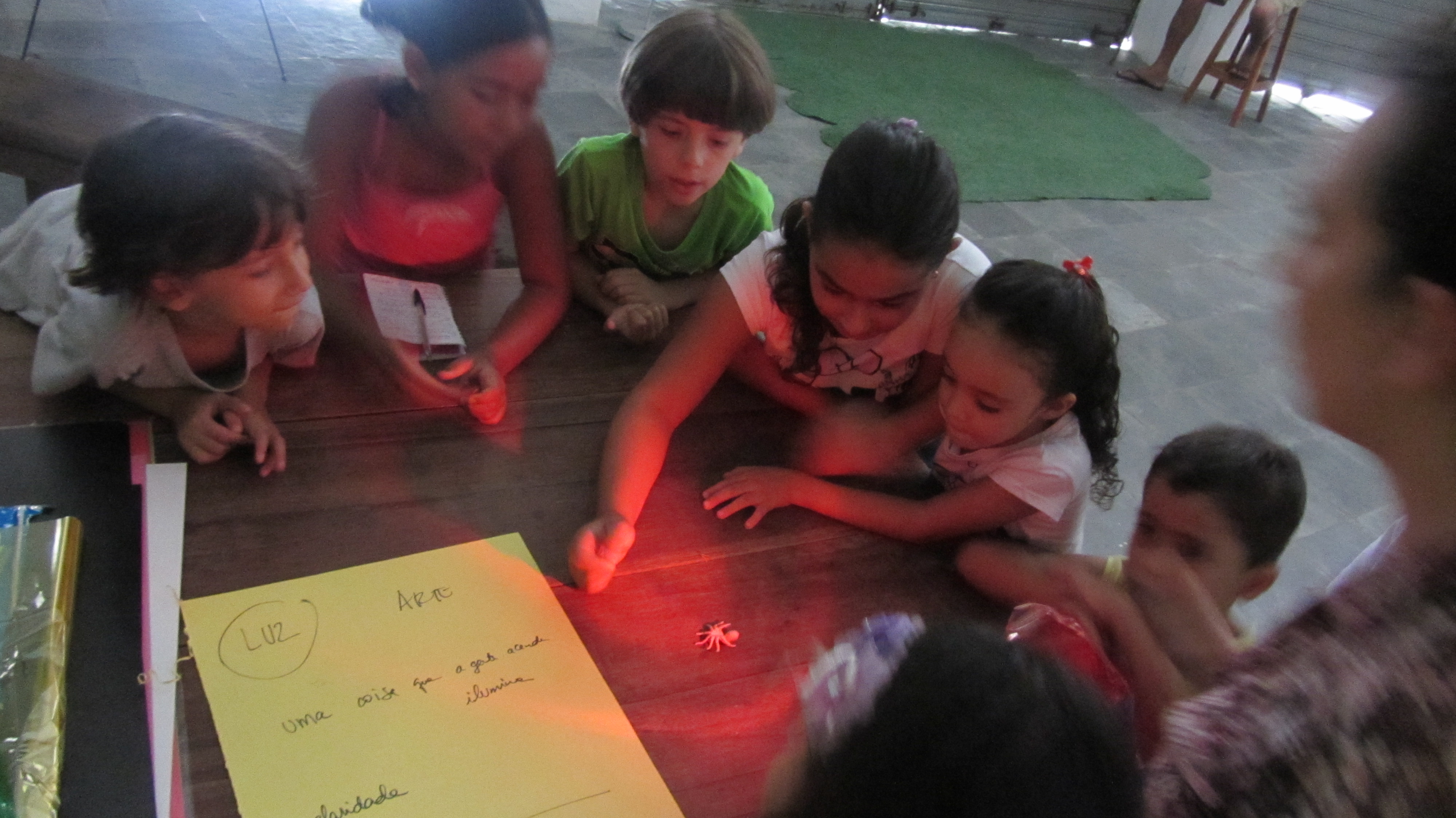 We then start the experiments with shadows. We turn on a lamp and everyone starts to play in front of the light focus casting shadows on the wall. An explosion of fun and caos dominate the area as the kids are already getting acquainted with each other. The light projector is turned on and their attention is drawn to it. So we begin our explanations of how light and shadow work using toys so they can try to name the animals by their shadows. They mix up an octopus for a spider and discover that shadows can be very deceiving. As an example of how shadows can work we show a piece of the animation Brave where light was used to trick the bad guys and save the hero.

For the colour experiments we used transparent paper to draw houses or under the sea scenarios. With little toy objects we had shadows of fishes, trees, etc. and began to fill it with colour using cellophane paper. The blue paper a little bit cramped gives an impression of flowing water. Then we began to tell a story using the materials on the table, when the dinosaur was to attack the house we used the red cellophane paper to cause a sensation of fear, and for the happy ending we used yellow. 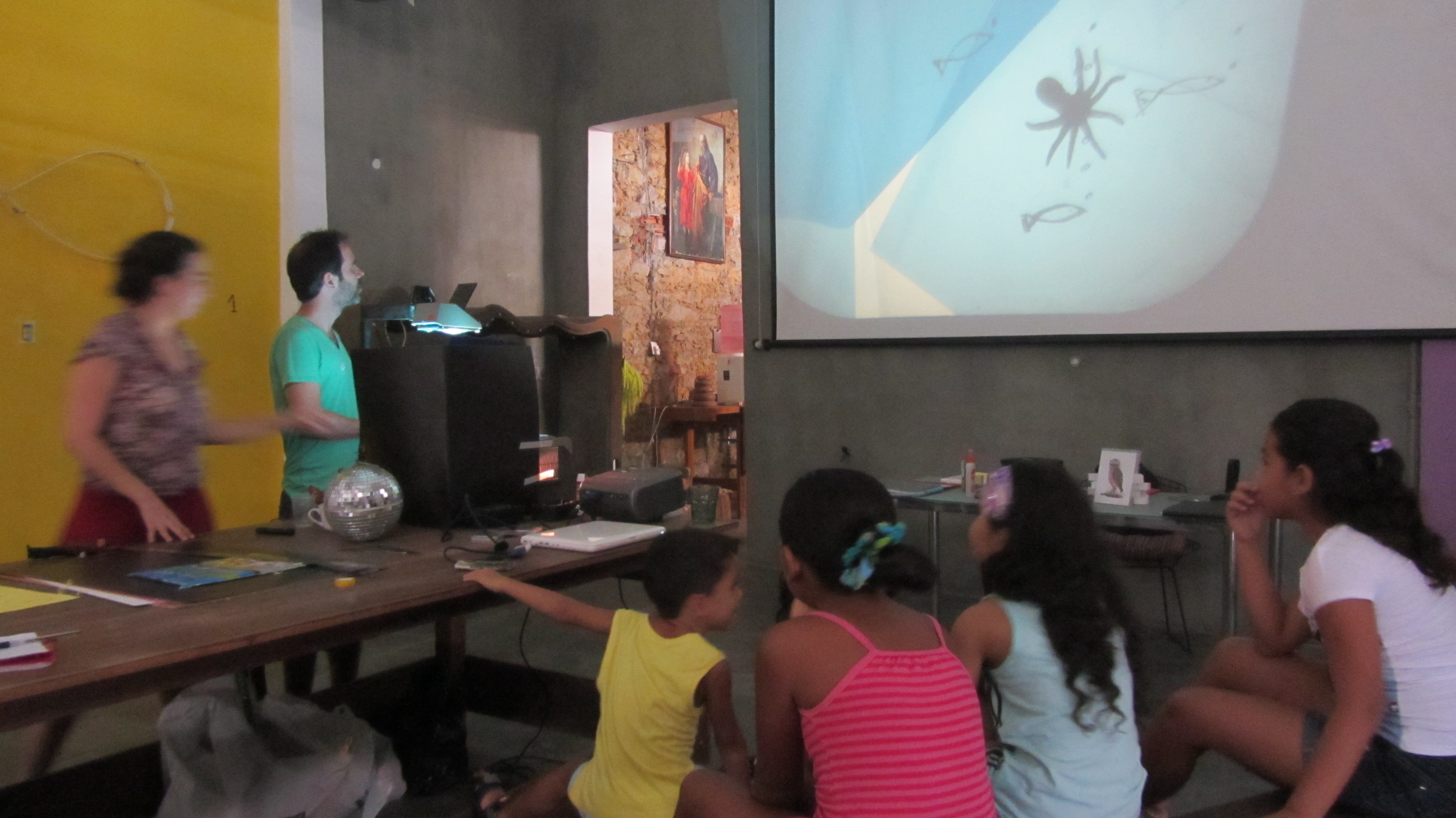 The kids loved it! Now it was their time to create a story. We handed out flashlights for each one of them. Again caos exploded with everyone running around and illuminating everything they could, exploring the power of their light tool. Separating in groups, we gave them some material to work with, toy objects, play doe, cellophane paper, transparencies and magic markers to draw. They were to create their own stories using light and what they had just learned from it.

The girls soon started drawing castles and designing gowns for their princesses, using the play doe to give their dolls long hair and flowing skirts in the shadow. Boys built armies of numerous soldiers multiplying them with the many light focus from their flashlights. We monitored, going around the groups giving them some advice and orienting on how to make the most out of their tools. There was an infinity of possibilities and they dived into it, experimenting and discovering. 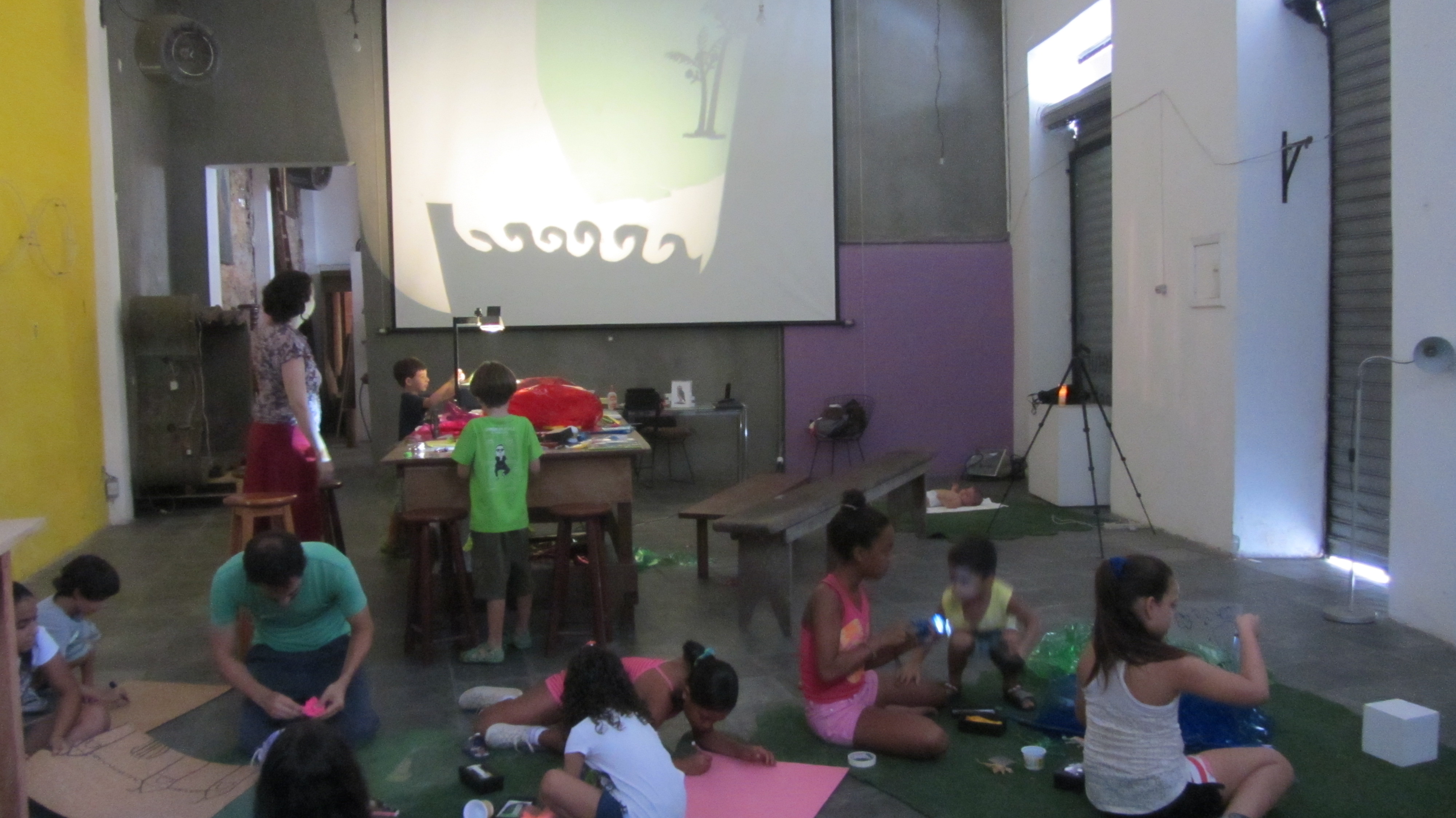 After 40 minutes of pure creativity they had to present their stories. Everyone sat around the table to hear and watch the stories come to life. It was magical! The girls very romantic with their fairytales of princes and happy endings and the boys with their wars and explosions. Everything very well explained, using shadows, colours and drawings. 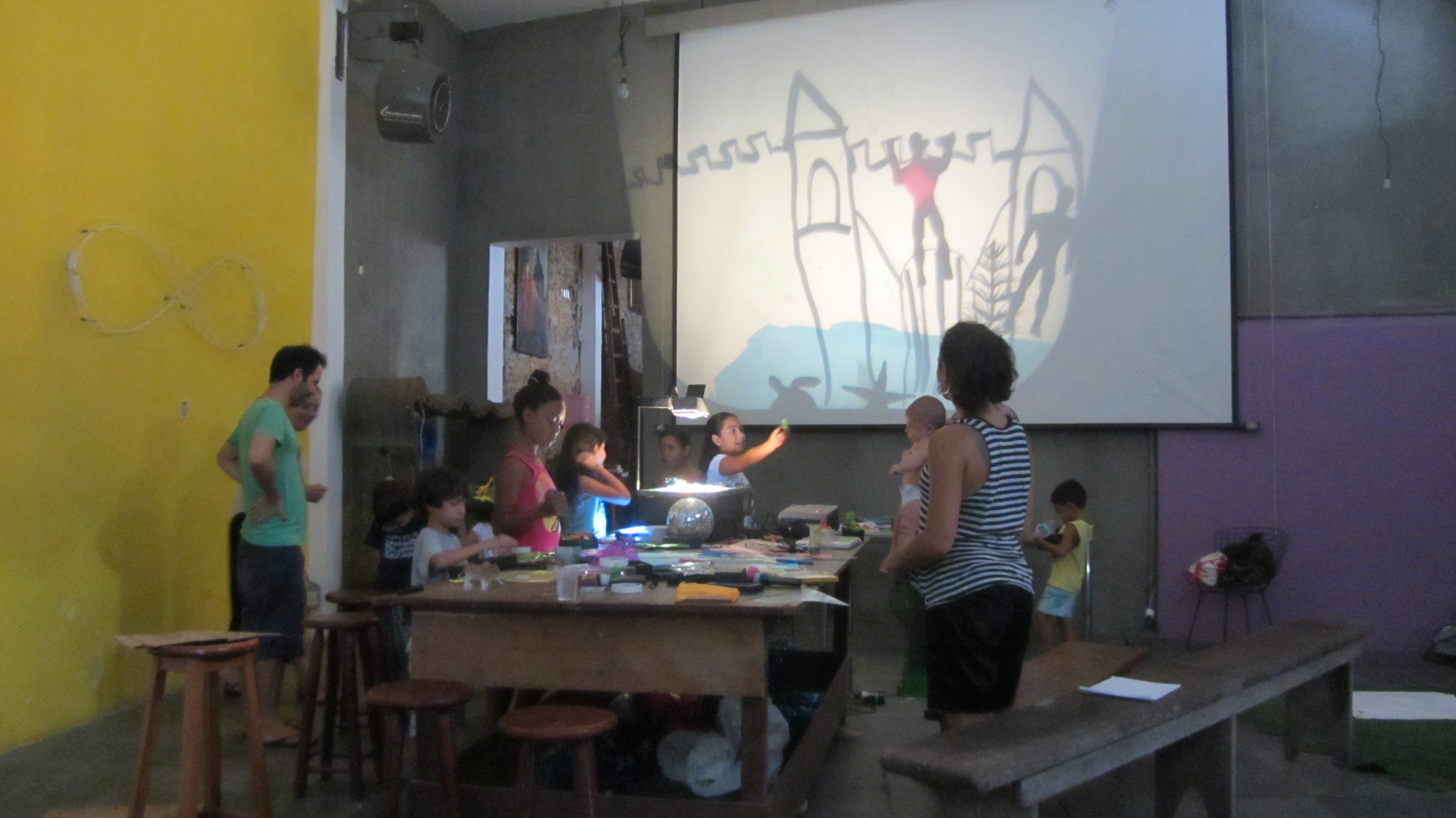 With their attention drawn again we asked if they knew what a light source was. Looking around they were able to guess and each one gave an answer: lamp, sun, even the moon came up. So each one made a drawing of their light source so we could hang them up in a final exhibition of the workshop results. We all discussed about why they chose to represent it the way they did. Then, to finalize, we asked again: what is light? To see what they had learned. And they answered: Lightning, colour, happiness. 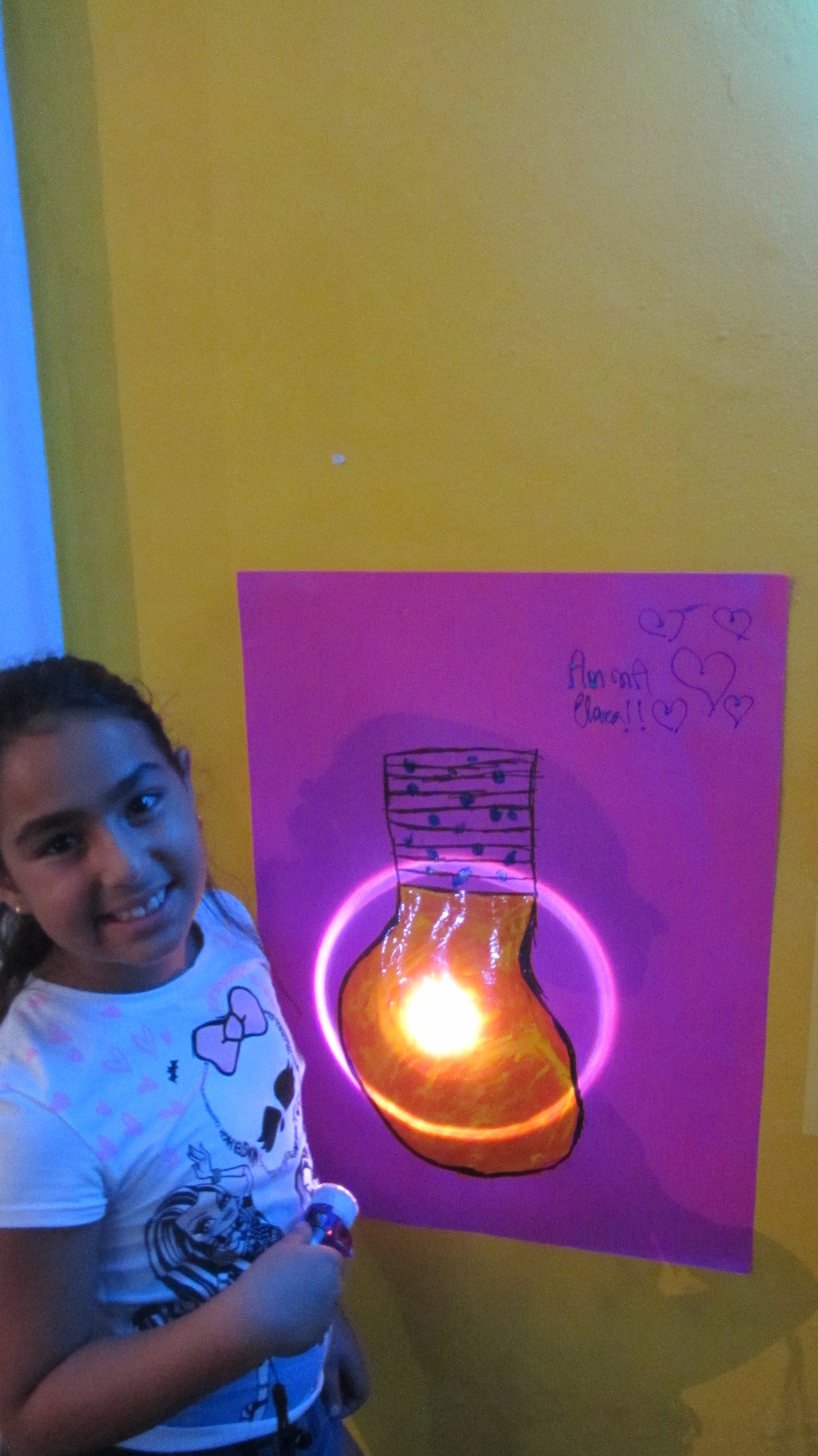