Being in Paris is like being in a theme park or a time capsule that transports you to a glorious epoch of art and culture, one that not only was maybe the greatest but that will never come again, so we might as well go to this city to revisit it. Modernism was a time of thriving of the most enigmatic and impressive artistic mentalities. Bohemian painters like Picasso and Van Gogh had Paris as their centre. All these geniuses together eclipsed other artists like Soutine that nevertheless had a marvellous talent. It is good to rediscover him now in the exhibition “Order out of Chaos” at the Musée de l’Orangerie until January 21, 2013.

Chaïm Soutine was born in Lithuania and moved to Paris in his twenties to lead life as a painter. He was lucky to find patrons along the way that permitted him to paint freely. A practice that was common in those times and that today is harder to happen. I ask myself why. Artist should be protected to create wonders that have greater and eternal value.

Imagine living in Montmarte during the 1920’s as a bohemian in a residence for artist. Soutine was very close to Modigliani and it’s a portrait of him done by his friend on a door that welcomes the visitor to the exhibition. It opens with intense, enigmatic portraits of his friends and patrons in citric, acid greens and yellows. He was not afraid of using bright and visceral colours.

Following into his lunatic world of houses and hills in diagonal perspectives and swirly strong brushstrokes. His landscapes are alive and they transport you as if you are in a boat or a roller coaster, tumbling and going round and round in a hypnotic movement, in an expressionistic view of reality with almost abstract patches of colour.

Evoking Van Gogh and de Kooning, who was inspired by him, Soutine painted a lot of series, going over and over the same scene in a neurotic approach to create an order to the chaos of sensations around him. Like for example the carcass of an ox motif, primarily explored by Rembrandt and tirelessly worked by Soutine who kept it rotting in his studio to the point of frightening neighbours like Marc Chagall who thought he was dead when saw all the blood coming from under his door.

He was considered a mad man at his time because he scorned all the rules of composition. But behind all his firm and abnormal style where intelligently done compositions, which he learned from the Old Masters in the Louvre, like in his The Little Pastry Chef (1992-23), where he used the same composition as in Portrait of Charles VII by Jean Fouquet.

His trembling impressions on paint reminds me of Francis Bacon and Lucien Freud who succeeded this line of representation. Soutine captured the psychological energy of his sitters in the pose, in the glimpse of the eye. The artist reveals himself on the figures he paints, melancholy, loneliness and insecurity comes through mirroring his tormented soul. One more that follows the disgraceful artist stereotype that is also part of the bohemian standard of this period in Paris. 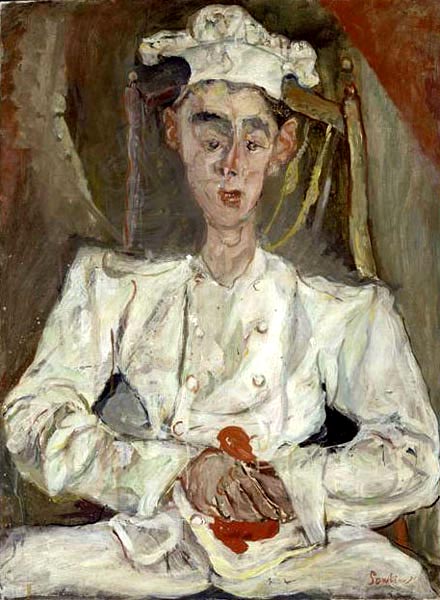