Mira Schendel’s exhibition at Tate Modern in London is the first monographic international show of the artist who is a very important part of the development of European Modernism in Brazil. It is very interesting to see how she adapted and created her own language. The exhibition brings more than 250 pieces between paintings, drawings and installations, some never exhibited before. Fairly unknown to the international public and still a lot to be publicized to Brazilians, she makes this connection in her work, which has profound European roots. Born in Switzerland in 1919, Mira immigrated to Brazil in 1939 as a Jewish fleeing from the Nazi. Arriving in Porto Alegre, where she began her career as an artist. Later she moved to São Paulo and participated on the first Biennial there in 1951. Then she married Knut Schendel, German, owner of Canuto’s bookshop, and became part of the intellectual circle of the capital. Mira spent her nights absorbed in deep philosophical conversations that are reflected in her works. After Tate, the exhibition will go to the Pinacoteca in São Paulo, crowning the bridge between São Paulo and London that began in 1966 when she presented her works at Signals gallery.

Even though surrounded by predominant artistic movements of the time, like Constructivism and Neoconcretism, Mira does not get fixed into any stile determination. Her abstract forms bear deep meanings that go beyond formalism. They float between the abstract and figurative and stay on the tangent, touching everything at the same time. Her ouvre is hard to decipher at a first glance, but by knowing her intentions it gets easier to understand. Inculcated of existential theories, she tries to understand the relation between man and world. Mira aims to go beyond reason through abstraction, but at the same time maintains a point of identification with the spectator through figuration. Her works have a non-temporal and universal openness that is capable of bearing an imminent and transcendental content at the same time.

She is able to translate philosophical concepts into material symbols in an enchanting way. The exhibition opens with “Still Life” from 1953 with which she participated in the first São Paulo Biennial. It is an experience of Gestalt from where she questions the flatness of painting, creating dimensions in dark pastel colours painted in tempera. She plays with perspective, pushing and pulling the viewer inside the painting. The sober colours and this perception game reminded me of Rothko’s paintings. Even though Mira focuses her influences in Europe and not on the United States, both were working during the same time.

During the 60s she begins to make geometrical paintings, but without following a Euclidean geometry because they are not symmetrical.  Basic forms like circles, triangles and squares make part of this metaphysical universal language. Mira plays with space in a reference to Phenomenology. Simple objects like a chair or a spoon gain a surprising corporeity through weight, contrast and comparing.

Her mystical and enigmatic compositions are transforming. The texture and materiality of her “Landscapes” (1963) approximate her to European art informel. But her arquetypical forms reaffirms her interest on the relation between being and the void, the unity of all. The spiral as a graphic element represents space/time. To put yourself before Mira’s paintings is to be transported into a non-rational dimension where nothing comes to your mind and you experiment the void. The same sensation you get with Rothko’s paintings. 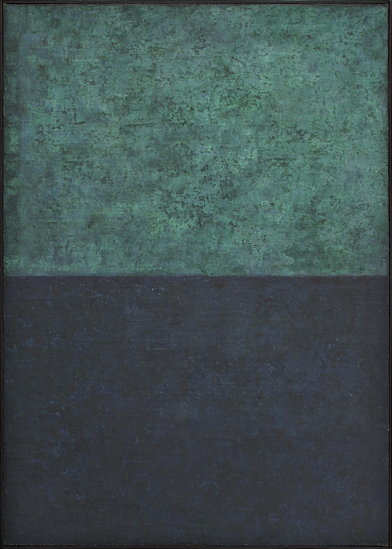 The force of meaning in her symbols and words are captivating and make of Mira a reference to Semiotics. Like in the series “Bombs”, where she can represent time in ascendance with such a simple drawing. The position of a line in space contains all the relation of the being in the void. When she travelled back to Italy, where she had studied when younger, she met with Umberto Eco, great Semiotics thinker. His book “The Open Work” is a great reference for her.

The letters presented on the “Monotypes” series, with more than 2,000 drawings made on rice paper are like readymades for the creation of a visual poetry. They don’t have a literary meaning, but are codes to a non-conventional language, open and universal, a silence that says it all. Without worrying much about technical maestri, more through the force of simplicity, she can transpose the essence of existence.

Different languages that were part of Mira’s life inhabit the compositions created by her stream of consciousness. In “Universe” (1964), that seems like a sketch of her vision of the existence of men in the world, and in “Alleluia” (1973), composed by references to Catholicism. Nevertheless, the series is not all that serious. In the monotype “A Fabric Net” she comments on the work itself by pointing out with an arrow where the paper ripped and writes “it ripped again”, and we become closer to the artist through humour.

With the same rice paper she created the series “Droguinhas”, sculptures made of the entangled paper and that together with her “Embroideries” relate to a more domestic and feminine production and references Zen by the simplicity of the task. The characteristic of transparency of the rice paper was a great finding for Mira who was studying the Philosophy of Jean Gebser at the time. For him, transparency is a form of spiritual manifestation that is in all things and that permits a transformation of consciousness. We see the evolution of Mira in this sense in what follows of the exhibition in a reproduction of the installation “Graphic Objects” created for the 1968 Venice Biennale. The viewer walks along the pieces that can be seen from one side or the other.

With “Little Train” which she brought to London for the exhibition at Signals, “Transformables”, the beautiful “Perforated” and the kinetic series “Discs” we follow on the transparency theme so fruitful for her career. Until we reach the installation “Still Waves of Probability” which she presented at the 1969 São Paulo Biennial. When many artists stated a boycott to the institution during Brazil’s dictatorship, Mira participated to show there are other ways of resisting. Influenced by Gebser she used transparent lines to demonstrate that there are things we don’t see but are a great part of our lives, occult forces, like faith.

The immateriality of the material, the visibility of the invisible. This installation and “Variables” were the highpoint of the exhibition for me. Many pieces of transparent paper hanging with engraved codes, some made with her own fingernail, cryptographic, but that doesn’t need to be deciphered to be understood. Very well assembled by Tate, with a magnitude and at the same time an admirable delicacy, to reveal the force of Mira to express transcendence.

The exhibition finalizes with her works from the 80s, referencing the dynamics of opposing forces from the I Ching and her last series from 1987 “Battens”, an explosion of basic forms, not contained in the determined space, recreated in the perfect harmony of her compositions. Mira managed to unite all her language to generate a modification in human consciousness through presence. Only by standing before her works already causes a transformation. The show at São Paulo’s Pinacoteca will be an unmissable opportunity for Brazilians to participate in this changing experience of Mira Schendel’s art.