A sponge, absorbing everything around him…
A chameleon, transforming himself…
An alien, androgynous figure of Ziggy Stardust…
My neighbour! Born in Brixton at Stansfield Road, 40.

David Bowie is many things and everything. Dissolved into contemporary culture, we will continue to see his influence many years from now. He is present, past and future. For him only now exits, as quoted on the entrance of the exhibition “David Bowie Is” at the V&A in London until August 11, 2013. Then it will go through a world tour, passing by USA and Brazil next.

He anticipated the diversity and multiplicity of our days. His notions of copying/editing lead the way to what we live today. Singer, amazing songwriter, actor, fashion icon, he has so many facets that is hard to list them all. The exhibition shows his many aspects in more than 300 objects from his personal archive. No wonder it was sold out, extended and sold out again.

Rich with props from his life path to stardom the show is full of enticing visual effects, a major example of how exhibition design has evolved into a spectacular presentation. At the end it closes with projections of his concerts on translucent screens that with light play uncovers some of his costumes on the background. Incredible set design. It has to be at David Bowie’s level after all.

The exhibition is chronologically laid out to prove how he created himself, struggling at the beginning to become what he always wanted to be, a star. David had a drive, a determination that, for me, is one of the strongest factors that increased my admiration for him. As we can see from his music sheets presented on the show he made many mistakes in his song writing at first because he did not have proper music lessons, he did everything on his own.

We encounter some of the personal objects he used, like the Grafton saxophone he got from his father at age 15 and had to ask some professional musicians for guidance. His first band was the Kon–Rads, in 1961. We can see from the props on the exhibition, like the sketches he designed for the stage set, that he was always into caring for the visual elements. He acquired his talent for rock and roll and advertising while working in an ad agency and rehearsing with his mates on the suburbs of London during his teens. Inspired by Chuck Berry and Little Richard, one of his greatest idols.

David was always very popular with girls. Even with his different eye colour, gained from a punch in a fight at school when younger. He had a particular charm, a man-child persona that remains until today. Back then he was David Jones, he changed his name to David Bowie in 1965 after the Bowie knife, with a blade that cuts both ways. You can see the actual letter from his producer stating that he would now be named David Bowie.

Bowie had incredible confidence for his age then. He borrowed riffs from known hits to create his own music, cutting and pasting with no regards to authorship. Going against what people were used to at the time, a proper mod habit. He even steals a Velvet Underground tune before it got released, so much for Andy Warhol as the precursor of appropriation. “The Man Who Sold The World”, “Jean Genie”, and the chorus for “Starman” he took from “Somewhere Over The Rainbow”. All where patchworks made up of influences Bowie had on his mind. Like the collages from Eduardo Palaozzi shown in the exhibition as part of his personal art collection together with Warhol’s Marilyn.

Cinema was one of his greatest inspirations, especially Kubrick’s “Space Oddity” from where he took the idea for his first great hit with the same name and “Clockwork Orange”, from where the outfit for his band, the Starman leotards designed by Freddie Burretti, came from; And later the Ziggy Stardust bodysuit designed by Kansai Yamamoto, also featured in the exhibition. Outfits that shaped fashion history. Bowie wore the best designers and was always incredibly well tailored. His costumes are the gems of the show, from his flamboyant bodysuits to his latest designs by Alexander McQueen, whom he spotted as soon as he had graduated from Saint Martins College to design the whole wardrobe for his 1996 world tour.

There is a room that resembles a movie theatre for his acting career. It took me by surprise to see how he can be a marvellous actor too. He was very well in the role of “The Elephant Man” theatre adaptation. He played Andy Warhol in “Basquiat” and recently made an appearance in Tarantino’s “Inglorious Bastards”. In another room with walls covered in soundproof material, you feel like you are in the studio with him. The audio guide changes in every step of the way, Bowie’s deep and calculated voice comes through in commentaries and parts of his music.

I felt like I was in his presence and did not want to part. I was one of the last people to leave the exhibition at 10pm on a Saturday night, ready to rock in London. 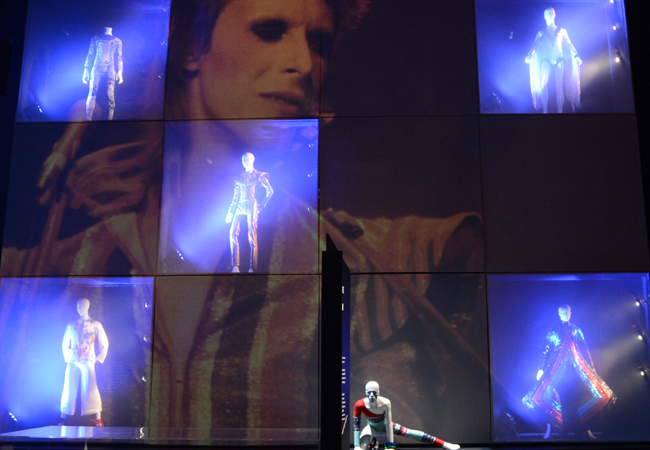 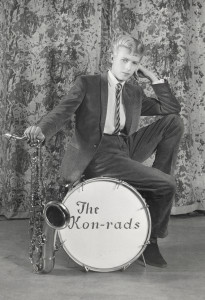 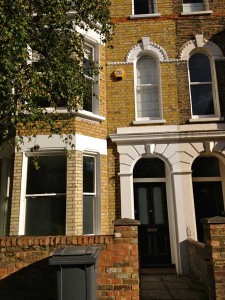 Where Bowie was born 1947, post-war child