What is space? What is time? Who makes the grass green? Where does reality happen? Is dream a reality? Is reality a dream? Why do I perceive things this way? Is the colour red for me the same as for you? There are so many answers that it is hard to know exactly. The only certainty is that there is no unique answer but a kaleidoscope of answers, an infinite spiral of information that we filter from to constitute our world. So in a sense life is a creation and like art is open to interpretations.

There are as many interpretations as there are points of view. In classical, logical knowledge we believed in concrete and determinate facts. But today, with the discoveries of quantum physics, a change of paradigms happened. Now we understand that there are infinite possibilities of ways things can be and all happen at the same time, we are the ones who make them real by choosing to believe in one aspect of it. So, in this way, reality, like art, needs the observer to happen. We perceive the world by our senses, we hear the sound waves and apprehend light waves as colour. Now we understand that even matter which we thought to be solid is also waves of particles, so the concrete world we believe in does not exist, it is all a form of perception, we create the solidity and contrasts of our world. Are you ready to go further down the rabbit hole?

The left side of our brain usually does the rational arrangements that shape our reality, while the right side is more intuitive and imaginative. There is more freedom of perception on the right side. Maybe that’s why it is called the “right” side. Apart from jokes, it is scientifically proven that newborns have not matured the spatial and temporal recognition adults have. They are mainly based on the right hemisphere of the brain; while the left, responsible for rational determination, is yet undeveloped. They do not have the sense of depth and time does not exist, everything is experienced as in the present. The right hemisphere perceives us connected and one with everything. In adults, the right brain activity responsible for intuitive, non-rationality, is weakened.

Ancient Greeks already knew that our reality is determined by our senses. They had an experiment where they used three buckets, one full of hot water, one full of cold water and one with natural water. The person would put one hand in the bucket with hot water and the other hand in the bucket filled with cold water and then put both hands in the bucket filled with natural water. The hand that was in cold water would feel hot and the hand that was in hot water would feel cold. So they raised the question: Can we trust our senses to tell us the truth? The answer is: Everything is relative. Our world is determined by our senses, so it creates a subjective reality for each one of us. Our perception is based on limitations developed by the left part of our brain, responsible for the constitution of patterns that will guide us through our world. Limits created by cultural and physical learning that generates models of thought, but we need to break these limitations to apprehend more and expand our consciousness. We can do this through perception and the exhibition II II II shows how we can break with these limits.

With the intention to create a shock that provokes the person to be aware of their own awareness, perceive their own perception – that will already change the brain patterns and expand the mind – they created an igloo structure that refers to Plato’s Cave theory to show that our senses create our reality. In this theory he tells the story of cavemen that saw shadows from outside of the cave projected on the walls and thought it to be reality because it was the only thing they knew. But they were just appearances. We can never know true reality because it will always be appearances filtered by our senses to us. This exhibition will raise these questions and turn your certainties into doubt. Through an audiovisual device prepared to test you perception there will be a moment where you will reach the understanding that you create your own reality. But you have to be prepared for that, there is where the frame of mind created by the text comes in.

The idea for the exhibition created by curator Manoela Bowles was based on her thesis Emancipation: The Power of Art where she unifies science and spirituality using art as a channel to lead perception into an emancipated awareness. Going through quantum physics and Buddhism she guides us into an experience of oneness with all that exists by showing us connections between different visions that share the same idea: that reality is an illusion. For the II II II exhibition she invited the Brazilian group Coletivo Moleculagem to create an igloo structure where an audiovisual installation took you on a journey through images and sounds that tested your perception by inducing the senses to a feeling of uprising or downfall, acceleration and deceleration – that did not happen physically only on the mind – through abstract 3D images and binaural sounds that provoked the senses and activated right brain cells, leading to a questioning of space and time. The group of audiovisual artists have carried out projects in cinema, advertising and stage sets and came together to create installations that have multidisciplinary substance as their main characteristic. The members are Sol Galvão, Alexandre Aranha, Pedro Conforti, Bernardo Varela and Pablo Ribeiro. They started Coletivo Moleculagem in 2005 and have done many art installations in Brazil and also in the United States of America.

The curator and the artists shared the same interests and connected ideas into investigating ways of expanding consciousness. They researched through Henri Bergson’s theories of mind and energy, Buddhism, quantum physics and even psychedelic culture to find a way to induce these explorations of the mind. The artists suggested the piece should be constructed in a tetractys, a mystical form of Pythagorian geometry, all to compose the perfect scenery for a transcendental experience uniting science and spirituality through technology. Technology activates neuroelectric circuits and the brain becomes aware of itself. Using technology they were able to trick our brain and show us that we can manipulate the world we live in.

It is interesting to acknowledge the likeness that technological language shares with abstract language, for example, the computer binary code. In the exhibition the images and sounds where abstract, so was the symbol: II II II chosen to represent the visual identity of the project. We chose to use abstract language as our identity code because we think it can reach a more universal understanding by being open to interpretations. Linguistic logistic is arbitrary, we try to determine things when actually they can’t be determined. Buddhists believed we have to communicate through metaphors to come closer to the truth.

Everything is relative, that is what the symbol II II II is about. It is an abstract symbol, open to infinite possibilities of interpretation, the moebius image on the background also refers to this infinite relativity, the relativity of reality, infinite possibilities of reality, to reach the understanding that all is 1. They decided to do the opening in 11/11/11. For many it can be a very significant date but for others it can mean nothing at all. This exhibition shows us there are no boundaries. It is an invitation to free our mind of fixed patterns and open up for new realms of reality. Relational aesthetics, together with quantum physics, believe that the observer influences reality and like abstract art it depends on the interpretation each one has about the work. Each interpretation is subjective, depends on the senses and cultural preparation of the viewer.

The visitor will use the igloo as a machine to alter his perception. He will go inside with his mind prepared and with the intention to be aware of his awareness, to perceive his perception, and receive the uncommon stimulus that will charge his brain with new neural synapses and open his mind. His senses will be tricked, without moving he will think he is falling, things will happen more rapidly with images appearing in fast movements and the sound follows, suddenly changing the rhythm into a calm sound and a slower movement of images. He will then see that time is relative. He will be totally immersed in the here and now, with all the possibilities of space and time around him. In a spiral-like movement into infinity of the universe of multiple possibilities, the ultimate quantum truth, to reach the understanding the Buddhists already claimed, that reality is an illusion. This experience was made possible by the Plato cave analogous igloo, the chamber of senses, of consciousness expansion.

The audiovisual piece lasts 11 minutes, 11 seconds and 11 frames, but for some it seemed like less and for others more, which contributes to the proof of the relativity in our life. Like quantum physicists say, everything is indeterminable until we look at it and believe in it to make it real. The same happens with works of art. This work can channel the beliefs of the people who experience it and lead to an emancipated awareness. The more people believe in this change of consciousness the more power it will have.

Abstract art is relative and it is the closest you get to universality because it is open. Primitive and modern abstract artists assumed abstract symbols can bring information from within, from our DNA. Jung studied the myths and archetypal language of abstract art. The abstract expressionists, for example, believe that with their minds empty of preconceptions the expression will come from their innermost deep self, so they try to leave the intellect aside and rely on spontaneity to bring intuition to the foreground. Existentialists also believed that art is a channel to know yourself.

At the II II II show the audience believed in the transforming effect of the piece and left the exhibition with new eyes to experience the world, eyes that were prepared by the conceptual text that framed the experience and prepared for the enlightenment that came by intuition. It lead to the awareness that we can manipulate our experience of reality, we don’t have to follow the pace imposed by consumerist culture. If we understand nothing is fixed we are free to change. Free yourself, there are no boundaries! In this exhibition we try to dissolve all certainties by breaking with the limited patterns and guide into mind expansion that leads to emancipation. It follows contemporary art tendency of experimental installations that provokes a wow effect, like a theme park ride. But this one plays with your way of viewing reality and the effect does not wear off, it affects the world around you by giving you a new frame, a lens that enables you to see the world with new, emancipated eyes. 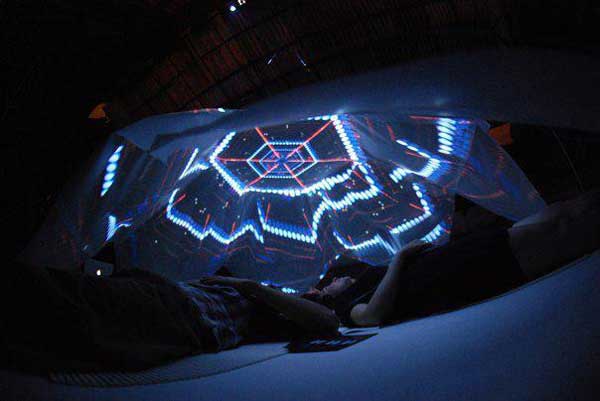 Leave a CommentLeave a Reply to Manoela Bowles